Elyssa Andrus
Daniel Petty doesn’t make excuses. He makes sales. The 23-year-old Edmonton, Alberta resident lost his vision in a horrific auto accident five years ago. But that hasn’t stopped him from becoming one of Vector Marketing Canada’s top sales representatives. He recently placed third overall in the country for the 2016 summer scholarship campaign. And since joining Vector Marketing Canada in April, he’s sold more than 40,000 worth of Cutco Cutlery.

Petty is the number-one new representative in the Edmonton Office, says his manager, Mitch Tainsh. Petty thinks he can achieve just about anything, Tainsh added. “Daniel is one of the most innovative and motivated people I have ever met,” said Tainsh. “Daniel pushes himself out of his comfort zone and forces himself to grow.”

In 2011, Petty broke several bones and fractured his skull when his ’92 Ford Escort collided with a semi-truck. He spent six weeks in the hospital – two in intensive care – and nearly lost his left arm. Doctors said the accident also badly damaged his optic nerve and caused him to go blind. Petty said losing his sight forced him to decide what was important, and what kind of person he was going to be. Everyday tasks such as locating keys or taking notes weren’t simple any more. Just maneuvering down the street was a challenge. “Being blind is really a ‘do or do-not’ disability, and I just decided I didn’t want to live in a group home, or have to rely on my parents for the rest of my life,” Petty said. “Wouldn’t, couldn’t, shouldn’t, maybe ꟷ in my opinion, those are the worst kind of words, those are terrible words. I decided either you do something or you don’t. And if you are going to do it, make it good.” 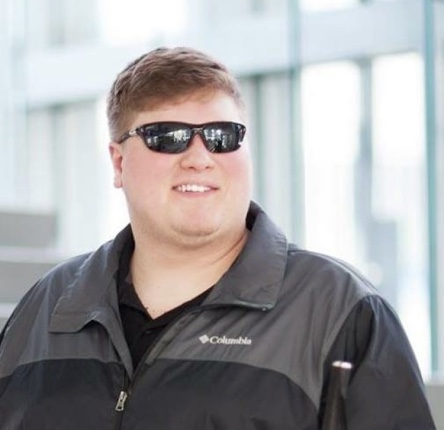 Petty scrapped his plans to become a heavy-duty equipment technician, and three months after the accident began upgrading his education. A year after the accident, he enrolled in the NAIT polytechnic university, where he has won a $2,000 scholarship to help with living expenses. He expects to graduate with a degree in marketing in 2018. While Petty was adjusting to a new school and new way of living, he was out of work for 22 months. He knew that employment was a key to living independently, but had a hard time finding a company that would hire someone who is blind. Until he found Vector.

“Vector said, ‘Okay, this is what we want you to do, let’s figure out how to do it.’ I really liked that. It was an equal opportunity. It didn’t matter that I was blind, it just mattered that I could do it,” he said. Petty looks forward to growing his Cutco sales and perhaps one day becoming a branch or district manager. He says that on the road to achievement, it’s important to take that first step ꟷ and to know where you want to end up. “A lot of people look at Vector as just a knife sales company, and it’s so much more than that. Vector is a vehicle that helps people who want to succeed. It’s a business that pays you what you are worth. You can be as successful as you want to be, there are no limitations.”

Elyssa Andrus has worked as a journalist for 15 years, most recently as the lifestyle editor at the Daily Herald newspaper in Provo, Utah. She is a contributor to the KSL-TV show "Studio 5" and is co-author of the book "Happy Homemaking" (Cedar Fort, 2012) with Natalie Hollingshead.

Vector is a privilege