Sherri Dickie
One of the pillars that our company stands upon is philanthropy and giving back to the communities in which we’re a part of. It is remarkable to see young people, still finding their way in the world, put others’ needs above their own. And a great side effect is seeing how those charitable efforts can also bring a team together on a new and deeper level.

For the past several years, our Western Canada sales team has partnered with the Front Row Foundation by pledging a percentage of their own sales and gathering donations throughout their biggest PUSH week of the year.

The Front Row Foundation's mission is to send those who are facing critical health issues to their dream music, entertainment or sporting event and to provide a Front Row experience that will allow these individuals to set aside any physical or emotional challenges while they celebrate the beauty and emotional energy of life.

During the 2 weeks leading up to our biggest summer conference, our Western Canada reps, managers and customers came together to raise over $8100 for the Front Row Foundation. While every story is special, this year, they’re even getting the chance to help a special man who worked for Vector years ago. Mike Chan, a self-professed super fan of Jarome Iginla, and the Calgary Flames would love to see a Flames and Colorado game. He’s presently fighting his second encounter with cancer in the past 7 years, but he’s not letting the Neuro Endocrine Carcinoma affect his positive outlook on life. 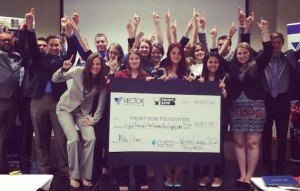 While it took an entire team effort, I would like to recognize Vonny Fast and Braydon Germain for personally donating $500, Jay Gramlich for donating $450 and Mitch Tainsh for donating $400. Keeta Newman was our top fundraiser, really tying her clients into her mission and raising over $250. A special thanks goes to these leaders.

Many of our managers and representatives set some lofty goals for themselves. Sometimes, especially when we’re pursuing a challenging goal, it’s easy to give up on ourselves, however it’s a lot harder to give up on someone else. Many on the team found that extra drive, knowing their efforts were for Mike as well. They often have even greater sales success than they would have without pledging their donations, because it brings a whole new level of commitment to the process.

Jim Rohn said, “only by giving are you able to receive more than you already have” and I believe we’ve all been touched from this experience.

Out on a Limb…