We are stronger because we have both men and women in leadership!

Sherri Dickie
With International Women’s Day occurring earlier this week, I like many, took some time to reflect on the amazing women in government, technology, science and business who paved the way before me. I also reflected specifically on our own organization, Vector Marketing Canada, and thought about some of our tremendous role models, like our National Sales Manager, Angie Macdougall. I reflected on what we do well, and where we too have opportunities to continue to grow. So I took it a step further and reached out to some of our current leaders and those moving into managerial roles, to get their perspective first-hand. For example, Assistant Manager, Daniel Petty, believes that while

“Vector exceeds at being an equal opportunity employer, my being here alone, attests to that…we could do a better job in making sure we feature successful females in all of our teaching and training videos.”

While something like this can be overlooked within a company, this is a relatively easy fix, so it gives me great confidence. I think Vector Canada’s General Manager, Joe Cardillo, hit the nail on the head when he said,

“I think mistakes most men make are out of ignorance rather than arrogance, and I think the more education men get to understand how their actions can be perceived by women will continue to help. The most thriving organizations in our company happen when a team is filled with a mixture of great women and men going after their dreams and that is the goal for every organization in our company. As men, we need to continue to make every level of opportunity in our company welcoming to women and an arena where everyone feels comfortable and confident to learn, grow and dream.”

We also need to be very intentional about recognizing some unconscious beliefs that we might have unintentionally lingering below the surface. I still remember the Heidi and Howard experiment that Sheryl Sandberg references in her popular book, Lean In. Professors at Columbia Business School ran an experiment to analyze the perceptions their students had of men and women in the workplace. They used a real Harvard Business School case study that talked about a successful venture capitalist, and outlined their traits. Half the students were given the story to read of Heidi Roizen, while the other half of the class were given the exact same story, with only one change, instead of Heidi, it was now Howard. “The students rated Heidi and Howard as equally competent, which made sense since “their” accomplishments were completely identical…However Howard came off as a more appealing colleague. Heidi on the other had, was seen as selfish and ‘not the type of person you would want to hire or work for.” (Lean In p. 40)

While the study is from 2003, and we can hope that that students may not have that same reaction today, if it was duplicated, I’m not sure those underlying perceptions have fully dissipated. Sheryl goes on to explain, “When a man is successful, he is liked by both men and women. When a woman is successful, people of both genders like her less. This truth is both shocking and unsurprising: shocking because no one would ever admit to stereotyping on the basis of gender and unsurprising because clearly we do...We’re aware that when a woman acts forcefully or competitively, she’s deviating from expected behaviour. If a woman pushes to get the job done, if she’s highly competent, if she focuses on results rather than on pleasing others, she’s acting like a man. And if she acts like a man, people dislike her. In response to this negative reaction, we (women) temper our professional goals…In order to protect ourselves from being disliked, we question our abilities and downplay our achievements, especially in the presence of others. We put ourselves down before others can.” (Lean In p. 40-41)

That’s why I think it is so important to have strong female role models that those coming up in a company can look to. This certainly was the case for our District Manager, Kristen Nypower.

“The biggest thing I try to do is be an strong example of a successful woman in my position. In my experience, (when I was new) seeing that example challenged me to want to be like them, and they showed me how to get there.” 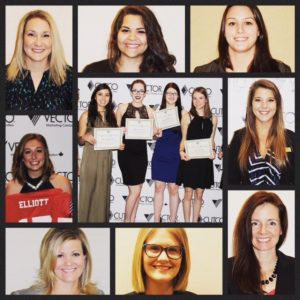 I am super thankful though that our company culture is perceived to be inclusive, and not only that, but as new Branch manager, Julie Pratt says,

"within our organization, it is not about treating women better than men or treating men better than women, it's about how hard you work, how hard you dream, and how much you can push yourself. That is advancement in our company, the only limitations are the limitations that you put on yourself…We always say "what you put in is what you get out," and this is true. Regardless of gender, I feel our organization does a very good job of recognizing people equally based on results rather than bias."

“both males and females in this company have proven they can excel and accomplish big dreams which is how we choose to portray the business."

It was reassuring to see that these common beliefs that Vector is equally supportive of both men and women in all levels of our business. I believe that we have to be continually intentional about the way we work with both women and men, so last year we started a 100/0 campaign, which means we collectively own all interactions that take place within our company, ensuring they are positive experiences and there are zero excuses for not making this happen. Veteran District Manager, Rob Chung feels that,

“Vector as a whole does an excellent job of treating people the same, while still not being ignorant to the outside world. The company addresses these from the start, and initiatives like 100/0 shows how conscious they are.”

I will continue to do my part to ensure that both men and women feel that there are equal opportunities for them thrive and grow within our company. Things may not be perfect in the corporate world, and we have areas of opportunity as well, however, I’m incredibly encouraged and excited to grow our great company with the voices, talents and drive of our leadership team.

Don't let failing be the last thing you do