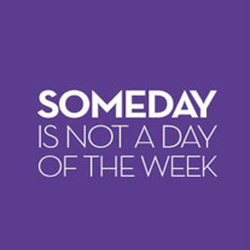 All throughout high school, I was never very motivated. School was easy for me, regardless of my frequent procrastination and weeks of class missed due to my health, I still received high marks. I never had to work hard in my classes, so I never bothered to. Procrastination made its way into all aspects of my life; I watched by every year as I broke my resolutions to get in shape, to eat healthier, and to stay organized, putting off each of my goals and rationalizing my way out of achieving them. This past summer, I procrastinated my search to find work for the summer.

When the first week of July rolled around, I found myself stranded in my final summer before University with zero prospects for a job. As with most other things in my life, I'd expected the perfect summer job to fall into my lap, which was not the case. I began hunting for jobs online after a week of my dad's constant urging, finding Vector Marketing Canada's ad for flexible student work. After researching the company with my father, I was a bit skeptical as to whether or not I could be successful as a sales representative, but decided to keep an open mind and give the position a shot.

My first summer at Vector Canada was a huge wake up call for me. After a few weeks of working with the company, I realized that I would not be successful if I continued to skate by in life doing the bare minimum; procrastination was no longer an option. My manager Ian helped me realize that the more I continued to make excuses and put off working towards my goals, the less satisfied I'd be with my life.

The people I've met working with Vector Canada, both in and out of my home office in Hamilton, have provided me with the support, motivation and tools to WANT to put in the hard work necessary to achieving my goals. I saw how doing small tasks each day paid off, bringing me a step closer to my next promotion, or winning a trophy. In the 6 weeks I worked that summer, I was able to sell $14,000 of Cutco, qualifying for amazing trips like white water rafting and an end of summer conference in Vancouver. I also earned more in that 6 weeks than I'd made at my previous job in a year!

My first term of University this fall provided me with a lot of obstacles, both in school, and in my personal life. I experienced a lot of health issues that held me back from achieving many of the goals I'd set out for myself. Reflecting back on my summer, I knew that I couldn't let my physical health be an excuse that prevented me from achieving what I wanted. I stopped procrastinating, and took the steps I needed, putting myself on track to be in tip top physical condition.

In 2013, I refuse to allow anything to hold me back. I'm currently training to run a 5K in March, which I just registered for last night, as well as a 10K in May. I'm working towards my next big promotion with Vector Marketing Canada, as well as earning one of the top 10 scholarships for the spring campaign, and working hard enough to be considered a candidate to run an office in the summer of 2014.

The amount of opportunity available in this company is unbeatable, and I've had so many additional opportunities available to me because of the skills I've learned. If it weren't for Vector, I'd probably have ended up an unmotivated teenager getting through her first year by the skin of her teeth, but because of my Vector training I've been able to motivate myself and overcome the challenges of my program. I've learned how to not only set goals, but how to map out the steps I need to take in order to achieve them, which has made a world of difference in keeping myself motivated and focused on my success. I have big goals for myself this year, and I can't thank Vector enough for providing me with the tools and the opportunity to achieve them.

Julianne Skene is a assistant manager and sales representative for Vector Marketing Canada in our Hamilton, ON office.

In Business For Yourself, But Not By Yourself

Do You Have This Much Fun at Your Summer Position?

Cut out for sales