Have We Forgotten How to Connect? 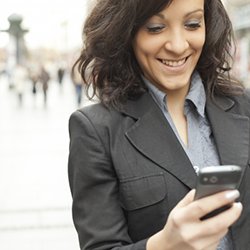 I started with Vector Marketing Canada back in May of this year. In the four short months that I have been with Vector I have met so many influential people, learned incredible amounts about myself and the world of sales, and had more fun than I ever would have imagined doing a summer job. However, more than just learning about the sales process that I take part in on a daily basis, I have learned the importance of communication skills and networking in today’s economy.

With increasing amounts of technology now dominating our day-to-day lives, it is becoming a prevalent issue among our generation to lack the ability to communicate with people face-to-face. As we hide behind email, Facebook, Twitter and texting, even picking up the phone to speak to someone has become a difficult and uncomfortable task for many. If we are unable to share ideas and effectively communicate with other people in a company, even the graduates of the Ivy League universities will find it difficult to make the most of their prestigious education.

Working as a sales representative with Vector Marketing Canada forced me to come out from behind the wall of technology we all tend to live behind and communicate with people directly. In order to make appointments with customers I had to pick up my phone and speak with them, and it has now become habit for me to pick up the phone before sending an email or a text. I have also spent hours and hours with people who were formerly complete strangers and that has helped me learn how to form relationships with people of every personality type. As I built my customer base I met people from every industry you could imagine, which not only has given me the opportunity to learn about the different jobs that are available to me as a current university student, but also has allowed me to start sharing my goals and making possible future employers aware of me.

According to an article in Forbes Magazine written in 2012, 60% of college graduates cannot find work in their field upon graduation. Working with Vector gives students the opportunity to set themselves apart from the thousands of other graduates in their field by having the direct business experience that so many young people haven’t had the opportunity to gain yet. As I work towards beginning my path as a Branch Manager next summer I also get to learn what goes into running a business and managing employees which is something that the majority of students do not learn in their specific faculty. By the time students who have worked with Vector hit graduation we have met many people in our desired field who are already connected to us as part of our customer base and who are aware of our ability to meet a client’s needs and communicate effectively and professionally with that client. Vector Marketing builds the skills which sets a student apart in the real world.

Laura Zubick started with Vector in May of 2013. She quickly made a name for herself receiving many promotions and went on to win our national scholarship competition last summer, selling more Cutco than any other student across the country. She is studying business at the University of Alberta and has many passions including traveling.

Selling Knives as a Music Major… why has that made sense?

A Summer Job that Accidentally Turned into a Career!