Chloe Elliott
I haven't really had a chance to reflect this summer, until I went camping over the long weekend - with Shandra, a great friend I've met at Vector. I haven't hit a lot of the goals I set for myself this summer, and after months of feeling like I a failure, it took me 8 pages of writing in my journal and probably half an hour of reflecting on what I have achieved/have not achieved so far, to realize that I am not a failure at all. I set some high goals for myself this summer, and whenever I wasn't hitting them, the feeling of failure washed over me, however after reflecting I now see how much I have accomplished. We are people who overcome adversity EVERY DAY. I have had SO MANY people say "no" to me this summer, and it wasn't until I had some time to reflect that I realized, I don't take things personally anymore! I can handle objections confidently, and looking back so far on the summer, I have given this my EVERYTHING. 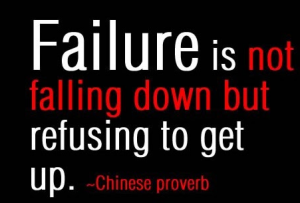 After I finished the SSC2 push last summer, even though I was just short of selling $10K, hitting $9100 for push, I did 40 demos. I gave it everything I had. I had no regrets, and I couldn't have been prouder of myself. That moment was what inspired me to open my branch this summer, because I wanted to give myself another opportunity to give my everything, but on a larger scale - I sure have done that!

I got attached to the numbers and how much money I was making along the way this summer, but I'm realizing now that it does not matter! It does not matter how much money I am making, and me not hitting my goals for May/July does not make me a failure. I took this next step in Vector to give it my everything, and I HAVE. I am sharing this now because, going into August, I now feel FREE to GO AFTER IT. I am taking August by storm, and Kelowna better be ready to see some CUTCO!!! Who I am right now is free, bold, and bodacious. I am going after my goal of selling $11.5K, and I am giving THIS my EVERYTHING!

Update- She did sell over $11,500 before going to Paris and ended the summer with some pretty impressive paycheques too!

Chloe Elliott started with Vector in the spring of 2013. While Toronto's her home, she has been studying at the University of British Columbia Okanagan campus. She loves to sing, and she was the External Events Manager of UBCO Beats, a cappella club. She was the #10 scholarship winner in all of Vector Canada the summer of 2014, and in 2015 she was promoted to Branch Manager in Kelowna. She is pursuing her sense of adventure and embarking on an exchange in Paris this coming semester.

The Dreaded Group Project…maybe teamwork doesn't need to be all bad!