What I learned from Oprah…the power of Connection!

Sherri Dickie
I had the opportunity to go to Washington, DC and take part in a weekend with Oprah for her “The Life You Want” tour. There are certain people whose presence you just feel, when you know you’re in special company, and that was certainly true with her. While I was fortunate to have really good seats on the floor, I felt a connection with her, it felt like an intimate setting, like Oprah and I were just having a chat. (even though there were another 22,000 listening in!) 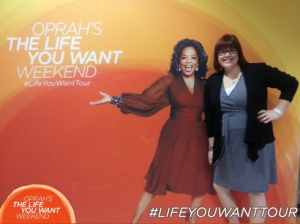 Someone as successful as Oprah needs to make an intentional effort at connecting, or it is very easy for the audience to find it hard to relate to someone so different from themselves, without the power, fame or fortune that she has. However, Oprah did a great job at bridging the potential gap between herself and the audience. She didn't put herself up on a pedestal and she was open and vulnerable about mistakes she had made and freely shared ordinary things that happen in her daily life.

And that was exactly one of the things she touched upon, the importance of connection. As humans, we all ask these 3 questions:

In our fast paced world, where we're connected to various people through technology, one of our core needs is to feel that we've been acknowledged, that we're being heard, and knowing that we matter.

I’ve actually witnessed this multiple times since I’ve been back this week in just simple day-to-day activities. My grandmother is in the hospital right now, and last night was moved to a new room on a new floor. She was in quite a lot of pain and was ringing her call bell for the nurse. On the old floor, they would have called back to her room, asking her how they could help, what she needed. But last night, when she pressed the button, she got no response. We didn’t think the call button was working. However on this floor, they don’t call you back, a light illuminates outside your room and someone on the nursing staff comes as quickly as they can. Even though it might have taken several minutes for someone to come to her aid on the other floor, she was much more content there… because she felt she had been heard.

Today I had to drive to Toronto for a meeting. During lunch, the conversation moved to the frustrations of “Toronto traffic”. One gentlemen mentioned that he’s courteous on the roads, and often lets people in, but he becomes very agitated and frustrated when he lets someone in, and they don’t give him that wave, that gesture of thanks. Again, he just wants to be acknowledged.

Whether you’re leading a team, making a sale to a client or trying to get along with a roommate, remember we all just want to be heard, we want to know that we matter.

What do you do to show someone else that you’re listening, that you’re attempting to connect with them?