Instead of Saying, “No” to Problems, Say “No” to Easy!

I heard the expression many years ago from Jim Rohn, “Don’t wish for it to be easier, wish instead to be better.” I remind myself of this often as I’m gritting my teeth through a particularly tough yoga pose, or when I’ve led a team that seems to face challenge after challenge. Yes, in the moment, sometimes I have certainly caught myself wanting, “easy”. 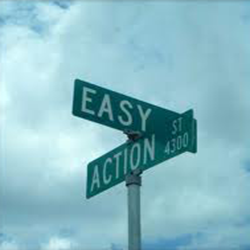 I was watching a webinar recently from Darren Hardy, editor of Success magazine, and he said, “the size of your life will be determined by the size of the problems you choose to take on.” That was a big AHA moment for me. He’s absolutely right. That’s how you play bigger, that’s how you gain influence, that’s how you make a greater difference in our world. When you think of business leaders who have stood out, like Steve Jobs, Oprah, Mark Zuckerberg, Richard Branson, Sara Blakely-they’ve accepted, dealt with and conquered not only a lot of problems, but big problems. Problems most would avoid because along with them comes enormous responsibility.

If you decide to play big, you simply can’t avoid problems, or hope for an easy route. So what are some keys to tackling them?

I think many of us, especially in a business setting, have been conditioned to believe that asking for help is a sign of weakness, however there is nothing wrong with seeking advice from a trusted advisor or mentor. Sometimes just the act of explaining the problem to someone on the outside is enough for us to see it through different eyes and come up the next strategy.

As Thomas Edison famously stated, “I haven’t failed, I’ve just found 10,000 ways that won’t work.” Most problems won’t be solved on the first try, so as long as we’re learning from mistakes, they’re a helpful part of the process.

It often helps to think about what your overall objective is. Once we get clear on the desired outcome, it is easier to come up with one action step that will bring us closer. Most problems need to be solved one part at a time. Focus on the small wins.

Most of our greatest accomplishments in life aren’t easy, and the journey is paved with problems, but once they’re conquered, isn’t it always worth it?

You deserve to shine, so do I!

Attitudes vs. Outcomes – How the Right Internal Mindset Leads to Spectacular External Success